Except for the weather (today’s an exception – today’s weather is perfect), I like living in Iowa.  It’s a good place to raise a family.  I don’t feel uncool because I don’t wear name brands.  I know most of the people in eastern Polk county.  Our schools are great.   It’s safe and the traffic isn’t horrible unless I go to West Des Moines.  There are also a few places to eat that make Iowa great.  They are namely Goldies Ice Cream Shoppe in Prairie City, B-Bops, Tasty Tacos, Latin King, Johnny’s Italian Steakhouse and Casey’s pizza.

When I was at the NGCOA’s conference last winter, I sat at the table with the managers of the golf course of the year for 2014 The Clubs at Cordillera Ranch.  I don’t have many shy bones in my body, so I didn’t take much time in asking the superintendent of Cordillera Ranch, located in Texas, where he went to school.  He proudly said, Iowa State University.  I shouted out “Go Cyclones!”

A smile came across his face when he asked, “Are you from Iowa?”  It was the funniest thing.  Here was a young man who had grown up in Iowa speaking to me with a southern drawl.  He said his family makes fun of him when he returns to Iowa.  As we talked about all things Iowa, he mentioned that there was one thing that he missed the most about Iowa.  Believe it or not.  It was Casey’s Taco Pizza.

Several of his colleagues simply wouldn’t believe him that a gas station had good pizza.  I confirmed it, though.  I had to admit that I was a on the Casey’s pizza lovin’ train.

It’s fun to watch an Iowa based company grow into something big.  This made it all the more of an honor when Casey’s called me a few years ago and asked if I would be willing to host their annual charity fundraising golf outing.  I couldn’t think of many things that would make me more proud.  Casey’s Charities gives out over 4.5 million dollars back to our community every year in the many forms of donations to kids, cancer research and more.  I’m so happy that we are a small part in helping this amazing accomplishment.  Their golf outing fills up two golf courses every year with more than 150 golfers at each golf course. 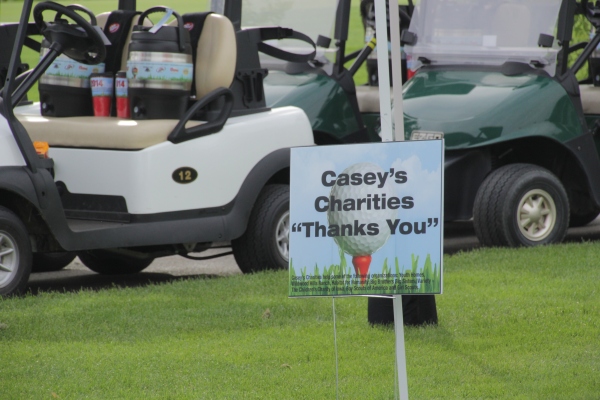 When I see what all they do for their golfers, their success doesn’t surprise me.  There is a different theme to the golf outing every year.  This year’s theme was Backyard BBQ.

Golfers were given large coolers that were completely filled with goodies from Casey’s vendors.  This meant things like chips, candy bars, gum, water.  If they sell it at Casey’s, then it was in the cooler.  They were also given cups filled with sleeves of Titleist golf balls.

Febreeze donated candles for each of the golfers which were placed on the carts.

They are a well organized machine and don’t leave anything out.  Golfers are provided breakfast, lunch on the golf course as well as a catered meal. 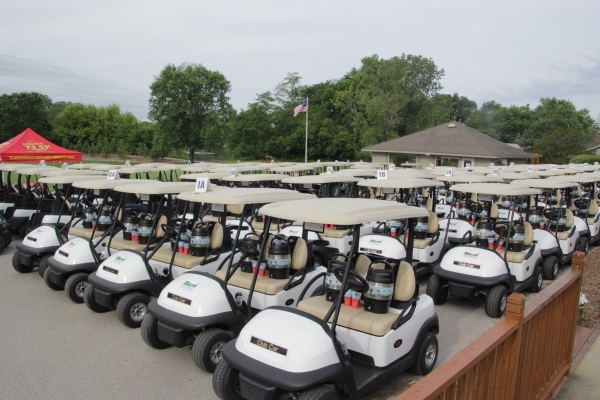 Casey’s executive staff members drive around and thank their many golfers.  Many of them travel great distances to play in this golf outing.  They even have a Cigar Cart where cigars are handed out.

The Casey’s staff members are gracious and efficient in all they do. 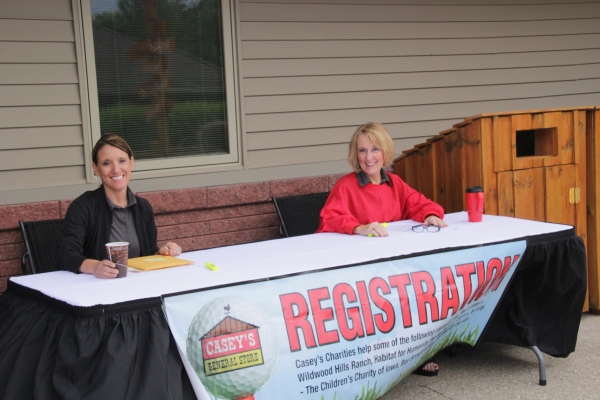 They include the practice green in their golf outing where a special event takes place.  This year, each golfer received a Casey’s grilling spatula with a bottle opener on one end.

I look forward to this golf outing every year.  The Casey’s Golf Outing event coordinator is excellent at her job.  She should probably hold a boot camp on how to plan fundraising events.  There is no doubt about it, she’s very good at throwing events.  It takes commitment and experience from a great Iowa company to be able to give millions of dollars back to our community.

I’m proud to be a part of that!

How about you?  What’s your favorite pizza at Casey’s?